I recently picked up the Bosch Bulldog Xtreme (RH228VC with 1 1/8″ chuck). I had a trusty old VSR model that I purchased used many years ago that finally gave up. I got a lot of work out of that drill and it served me well so my search was limited to Bosch from pretty much the beginning. I probably could have gotten the VSR rebuilt – I still might.    The main thing that made me go for this model was the vibration control that wasn’t present on the Bulldog one model lower that I was considering. This also had 2.4lbs of striking force, compared to the 1.7 my older model had. 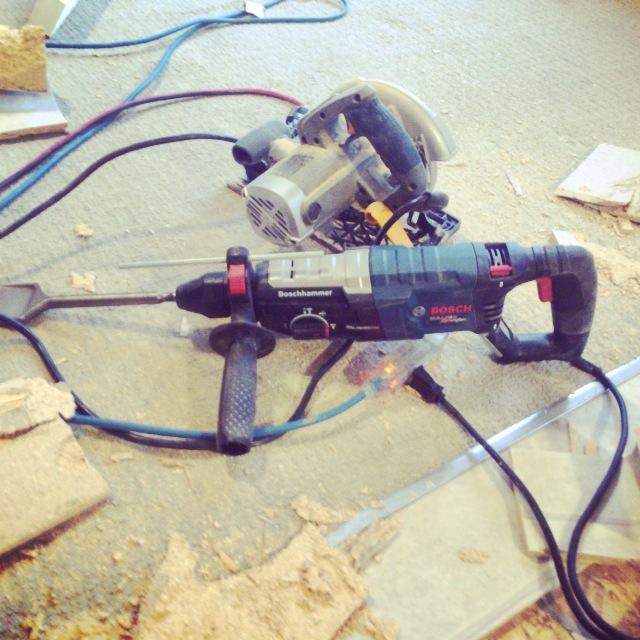 I don’t do a ton of concrete work, but use it mostly for demo work. Removing tiles, or for the first job – removing a glued and stapled particle board underlayment to prep for hardwood. We run a large number of circular saw cuts through the vinyl and particle board, then use the Bulldog to chip with a tile blade and remove the squares of vinyl and particle board underlayment.  We use to use prybars and hammers, but that gets old fast, the Bosch makes the job quicker, but it’s still not a fun thing to do.

The first job was two full and long days with the Bosch, this is where the vibration control was helping out. My old VSR was in rough shape, and it took a toll on the hands after a long day. I noticed a nice difference in the new model, it did a good job of reducing vibration (it’s never going to get all of it) but also of dissipating heat. My previous model would be roaring hot after an hour and we’d always give it a precautionary break, with the new RH228, it did get warm but knowing that the gear was in a metal case here we just kept going and it was fine.  The other nice thing about it was the weight and power – it has more power then my old model – and when you would just hold it in place with the right pressure applied, it  would pop a nasty tile after a few seconds. With the old VSR, you would often have to manhandle it and throw a lot of weight into it to get them out of the way, especially if you caught a piece that was stapled correctly.

Overall I’m really impressed by this rotary hammer, I would love to step up to something better eventually – but for the $200-$250 neighbourhood I think this is a huge value.

Matt is a woodworker from Calgary, Alberta and runs Westside Woodworks where he makes cutting boards, furniture and other projects.

The Bosch Bulldog Xtreme RH228VC is available on Amazon if you’re interested in purchasing it:

Matt is a woodworker and avid DIY’er from Calgary, Alberta. As the son of a general contractor he spent a lot of time on job sites learning the ins and outs of construction. His experience ranges from framing, flooring and finishing. He works on a large number of projects on his own home, as well as small jobs for friends and family. When he’s not working he can be found in his home wood shop.

This site uses Akismet to reduce spam. Learn how your comment data is processed.